There are several parts to the radio FAQ. This part discusses Military/diplomatic communications in the CPE and the US. Another part discusses the barflies plans to build the Voice of America, a Giant AM radio station capable of being heard on little more than bedsprings, and distributing plans for home-made crystal radio sets from Norway to Constantinople. Another part, recently posted discusses the technology behind how radio works, spark gaps and crystal sets. A final section discusses Vacuum tubes and electronic technology.

The military and diplomatic radio situation in the CPE as of the end of 1633 is a result of the historical accidents which left us with a wealth of some technologies and a dearth of others.

Sadly, while there is a cell phone antenna and cell in Grantville, (an analogue one) the cell was not linked to the local phone switch. It was operated by a different company. And while there is an excellent phone tech in town, he’s not a cell phone guy. It may be possible eventually to cross connect that cell to the phone system, but in the first two years, no one has had any success at it. The cell phones themselves are useless without the cell being attached to a billing and authorization computer system and to a phone switch. For all practical purposes you may regard cell phones as a source for small high energy density rechargeable batteries.

Pre ROF handheld and base station commercial FM radios were used by the coal mine, by the electric company, the cops, the school district, the city water department etc etc. – Dedicated to their PRE ROF use, continued, with one radio from each incompatible frequency set placed into the Grantville emergency Operations Center to provide crossnetwork link.

SSB radios have a second advantage in addition to range. They can not be overheard with a crystal radio. AM radios can be eavesdropped on with 17th century built radios. SSB radios have build in signals security. SSB signals are not understandable without a BFO (Beat Frequency Oscillator) capable receiver, and so SSB is secure except against stolen radios capable of tuning into the 27 MHz band. Having said that, stealing a CB is a possibility, stealing several is, but they also need to steal a batter charger, a generator, a set of batteries etc etc etc. The on-ship radios for the air force and the on-ship radios for the navy are the newer SSB models.

CB’s outside the ROF

Managing radio outside of Grantville for tac work for the military is non- trivial. batteries die, there are no power lines to plug chargers into. Cars with cigarette outlets don’t exist. If you and your army buddies go outside the ROF and you want radios to chat amoungst yourself for battle coordination you have to figure out how to power them. This is tricky.

First, just forget solar power, we have no supply of solar cells in Grantville and _can not_ make more. Wind, water, steam, and cranks are how we must power electronics outside Grantville. The french will have none of that. Well, cranks, I suppose, but they’ll have to have a person with pretty good electronics knowledge build a set. Trust me that destroying radios and batteries is just as likely as charging them if you are not _very_ careful. For those of you thinking about taking radios away from the industrial hearts of the CPE, away from your steam engines and windmills, try looking up Alfred Traeger for a hint. http://www.antiqueradio.com/traeger_pedal_07-99.html

We’ll be taking a page from Traeger’s book.

Here’s how you power a radio outside the ROF: 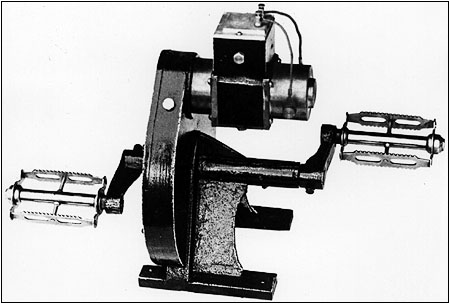 and here’s one of them in use: 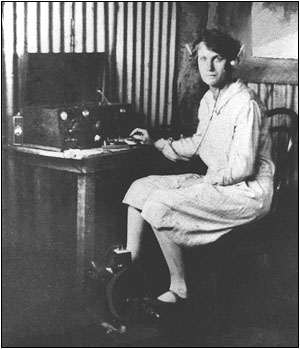 Battery management is difficult. Once we’ve used up the supply of car batteries (a car battery lasts about 3000 charge cycles, even with careful use the best will die within the next 6 years) we will be down to wet cells of some sort. Danielle cells, or hand built lead-acid cells with MUCH lower efficiency than what we brought along with us can be made.

Hand-held radios will slowly become man-portable and then fixed base operation as the supply of rechargeable batteries declines and we lack the tech base to make new batteries for them. Note that CB is mostly line-of-sight in the CPE due to the maunder minimum problems, and that “skip” for CB just isn’t an issue.

The MUF (Maximum Usable Frequency, the highest frequency that bounces off the ionosphere and can be used for long distance communications) is well below 21 MHz. Figure 2 to 10 miles for CB and that beyond that we have to relay messages. CB Relays on mountaintops will NOT be a favorite posting for army folks… and even that’s not good enough for strategic and diplomatic work.

There will also be a -small- number of FRS Family Radio Service 49 Mhz handhelds which are FM. Gayle used one pair in 1633 to chat with Oliver Cromwell. Range is very very limited (< 1 mile). Plus, see the battery problem above. We expect that less than 20 FRS radios exist in the ROF since in 1999 they were not yet popular.

There are 18 amateur radio operators in Grantville. They have a large variety of radios available. Several of those have been sent out with the various diplomatic missions along with antennas and antenna parts to London, to Amsterdam, and to Venice. Meanwhile, as of 1633 large antenna installations are in place in Grantville, Magdeburg and Lubeck with uptime designed and built “ham” radios for long distance use. Due to the Maunder Minimum and the sunspot issues, long distance communications is done via morse code at 3.5 MHz, and sometimes at 1.2 MHz.

We will be building more “ham” style radios for use by the army, the diplomatic corps, and the banking system. Using re-cycled parts, and arranging a relay network, we figure we can build between one and several hundred CW (morse code) only radios for this purpose during the till we get tubes on-line. We expect we can start tube production sometime in 1638. We can, using these downtime-built uptime-parts radios, we can have world-wide communications as soon as we can train operators and send them out. The limiting factor on building down-time-built radios is the availability of high power transistors and tubes salvaged from radios and old TV’s. There is a difference of opinion about how many such high power parts will be available. If Grantville was really good at putting its junk into the dump, (which did not come along) then there will be substantially fewer high-power radios built, and the information in the spark gap FAQ will be more important.

Strategic radio, long distance diplomatic and military communications will be CW (Morse code for you non-radio-heads) only. This is due to the much discussed Maunder Minimum (all the sunspots have gone away. Weird, but the sunspot count is going to be under 10 till the 1700’s.) We also have power problems as discussed above. So, long distance radio will be operating BELOW 4 MHz which we have, through much anguished discussion, some operation of MUF modeling software, and a lot of inspired guessing somewhat arbitrarily established as the MUF for the ionosphere circa 1633.

Expect that most long distance comm takes place along the “grey line” at sunset as the ionosphere fades from its peak during the day and long distance comm opens up for a short few hours. We expect the MUF to be moving DOWN towards 2 MHz over the next 5 to 10 years, but hope to have a local tube plant operating by that time. Listening to CW takes more than just a crystal set, as you have to have something oscillating to generate a beat frequency against to HEAR the signal against the background noise. “R” can probably steal one, but all the above power concerns come back again.

Additionally, it is presumed that we are not transmitting CW in clear, and that either one-time-pad ciphers generated off the computer screens, or reasonably sophisticated codes beyond manual cracking will be used.

We can build a LOT (several hundred) of strategic military and diplomatic comm radios using salvaged transistors and tubes from Grantville. Note however, that transistors have a “top frequency” beyond which they become mostly useless. We need high power high frequency transistors and/or tubes. Expect salvaging the power supplies of dead equipment to be a booming business for a while. Expect that EVERY tube will be cherished. We can make new tubes, they do NOT need glass envelopes, they can be made in metal pipe. This will take time and resources.

With the synthesized knowledge of the various bar radio folks especially Louis Robinson and Joe Ennis.