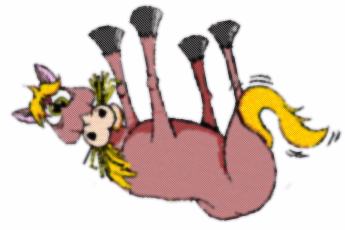 I’m not dead yet!

This document has evolved from the barflies use of the phrase “beating a dead horse” to refer to topics discussed repeatedly. We’ve been talking about the 1632 universe since 1999. Despite posts by almost nine hundred people of over 3 gigabytes, more than one hundred seventy thousand messages to the bar on practically every possible subject, occasionally, a well covered subject is “brought back to life” by a new and odd viewpoint. Recent examples include:

Therefore, if you are a relatively new barfly, please do not take this list as a prohibition to discuss these things, but rather, as a challenge. Sometimes, when you whip a dead horse, it gets up and stumbles around. Welcome to the bar. —

This FAQ is no longer posted to Baen’s Bar. It just got too long. It is updated, on the http://1632.org web site when I think of it. The editorial board has agreed to keep a copy on the 1632.org web site, and we have submitted that site to the Wayback Machine, so there will ALWAYS be a copy of this available on the web. (Sadly, the wayback machine has a very long lag before sites appear. The earliest versions of 1632.org have just recently begun to appear there. Still, we know it’s working now.)

First the REALLY short version. All these subjects have been done to death, on about a 3 month cycle since 1999. We’ve been there, Really. (This list is in no particular order. It’s the fastest way to get a feel for just how deeply we’ve discussed this.) If you want, you can skip to the wordier version.

Now for the somewhat fleshed out version. For a long flesh out, please ask about any of the below and we’ll try to get you a copy of some of the background discussion. This list developed from the inputs of many of the barflies, but it is completely my take on these things. I’ll take the heat, and the responsibility. Any errors are entirely mine. Anyone wanting to contribute an item to match an entry above, or a new one, email me directly, or post to the bar and either flag it as an DEAD HORSE item, or just write something really good and I’ll steal it. — Rick Boatright

Things that are NOT YET dead horses. Horses still up and walking around that it might be fun to know more about… Oxen, Chickens, Herbal Medicines, Oil refining, oil tankers from the Wentz oilfield, games. NO ONE has discussed organs yet as far as I know, IV tubing, IV needles, syringes, China, India, oh Ghods, lots of stuff. Let’s talk. Plenty to discuss.